Poker is one of the biggest games in the world of gambling. Unlike other games of chance in the casino, poker can be won with mere confidence and skills. As pro gamblers do, the key to winning even if you don’t get lucky in your hand is to bluff your way into winning.

At Luckyslots, we are committed to improving your gaming experience. As you try to create the best hands on the table, we would continuously give you bonuses, promos and convenient transactions to aid your matches.

Challenge yourself by playing on the premium poker tables at our casino!

The basic idea in poker is to create the best set of cards on the table. The highest position of cards in a game is the Ace followed by the King, Queen, Jack and the numbered cards. In most games, similarly ranked cards from different suits are worth the same.

There is also a poker variant that deals with low hands. This means that the low-ranking cards are preferred. There are also more variants that you’ll see on this guide.

The Hierarchy of Cards

The set of hands are assorted from worst to best hands in the high hand poker.

The hierarchy of a set of cards is also affected by the positions indicated. For example, a pair of aces will beat a pair of tens. This is also the same concept in straight flush versus the royal flush.

As mentioned earlier, the game’s not immediately over if you get a bad hand. The other players won’t know that you have a bad hand if you know how to bluff well.

In a classic game of poker, punters will work with the cards dealt to them (hole cards) and cards shared by the entire table (community cards). This allows them to have a slight idea of what each player can have.

Excited to know how it happens? Check out right here.

The game of poker happens through a series of events. This allows the players to slowly make their decisions while also increasing the pot to win.

The holes are given during the initial phase. Upon seeing their cards, players may decide to raise the bets or fold the match. In case, the game has no starting pot or ante, all players have to give their blind bets to the pot.

After the wagering period, the dealer removes a card from the deck (burning). Then three cards (the flop) are issued to the community cards. After seeing them, players can decide if they would check, call, raise or bet.

Checking would mean that players would keep their cards without raising their bets. Calling would mean giving the equal bet to the previous punter’s raise or call.

After the wager, one card is burned and the next (the turn) is dealt to the community cards. The process of wagering then repeats.

The last one of the shared cards (the river) is dealt in a similar fashion. Players also wager with similar options for the last time. As the river is given, some players who can’t create the best hands may fold. Other players will raise the bets adding pressure to confused players.

Here is when the cards are finally shown. Players will combine their hole cards with the community cards. In some games, players can also use only the shared cards.

Why Wager at an Online Casino

When poker is played at an online casino such as ours, you can also elevate your wagering by doubling your bet whenever you want! There are also various poker games that you can switch to with a simple push of a button.

The best thing about online table games is how the games are guaranteed to pay back about 97% or more of what you have wagered. Video poker tables always show a paytable of just how much you can win if you create a specific hand.

Aside from the classic version, digital casinos have incorporated new gimmicks to the mix. For example, the Joker can also be introduced to the deck as an additional challenge or help. Play your cards right and you’ll be cashing out prizes in any game you pick!

The classic game explained above refers to community poker. Inside this poker, other rules can also be made, creating new variants of the game. Aside from community poker, there are also straight, stud and other kinds of poker.

The Omaha is the closest to the game explained above. The only variation is that four hole cards are dealt during the Blind phase. To create the final set of cards, players must use only two of their hole cards and three from the community cards.

The challenging thing in the game is when you get dealt good cards on the hole cards. Thus, you can’t use them anymore.

Texas Hold’em is another variant of community poker. The main difference is on how the wins are made. The games most often have ante bets, for a predetermined jackpot. The usual betting pattern still occurs.

If you win through the showdown with a higher hand, you’ll get a payout of 1:1 for your total wagers. If you happen to get a straight flush or higher, you take home the entire pot.

Compared to the community poker explained above, this deals with a simple game where players only work on the five initial cards that were dealt to them. They can improve the cards by burning and replacing some of them with new cards. The usual rounds of betting happen.

Joker Poker moves in the same way as draw poker. You can throw away cards in hopes that new cards can create a better hand.

However, the game uses the concept of wilds, the joker cards. When a joker is drawn, they will substitute for any card that can create the best hand. The game AI automatically will freeze these wild cards as you burn and replace other cards through the usual draw poker pattern.

A valuable tip is that you should not save all wild cards if you get three or more. Jokers function to mimic other cards so they cannot do that if there’s no set to complete.

From Tangente, this game is a prime example of Draw Poker. As the name suggests, the wins start when you get a pair of jacks as you draw. As you go higher, the payouts multiply! 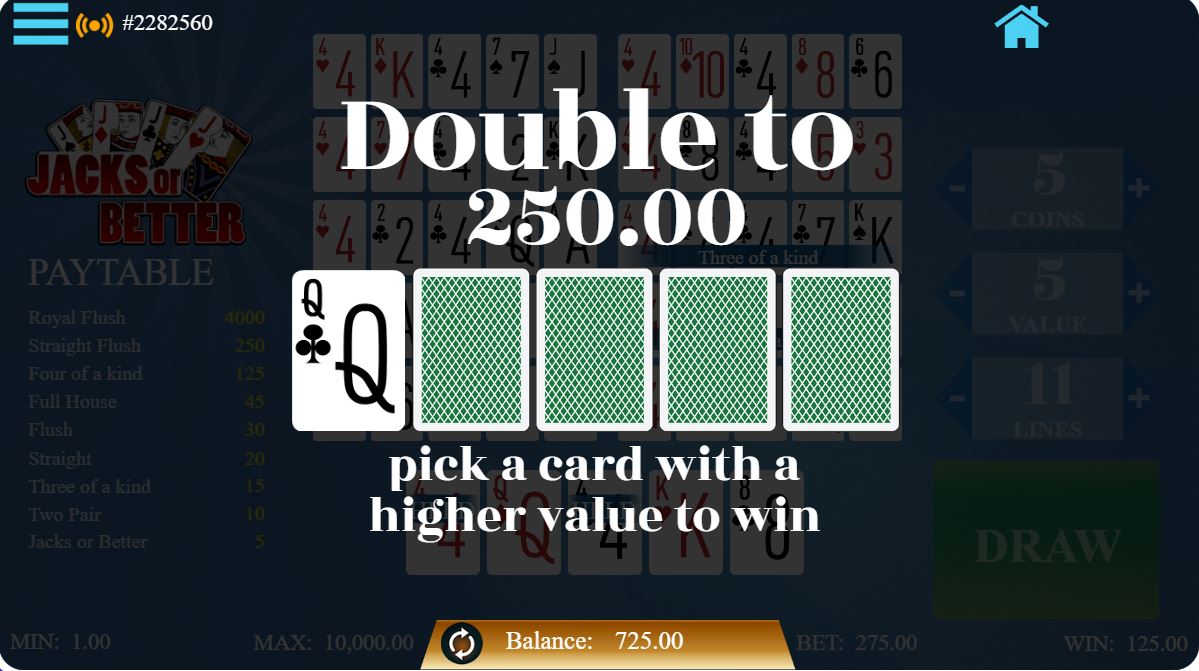 Based on Jacks or Better, this is another draw poker variant with a similar concept. As the game suggests, the highest payouts are a combination of aces and face cards. This game from Genii has an amazing RTP of 99.25%.

The 96.61% RTP is elevated by the additional features of the game. As you play and complete more hands, you can unlock bonus prizes and perks in this magical game!

As explained earlier, there are also other variants such as low hand games, high-low games and unique ones. Most of the time, the differences are either in the gameplay or the payouts. 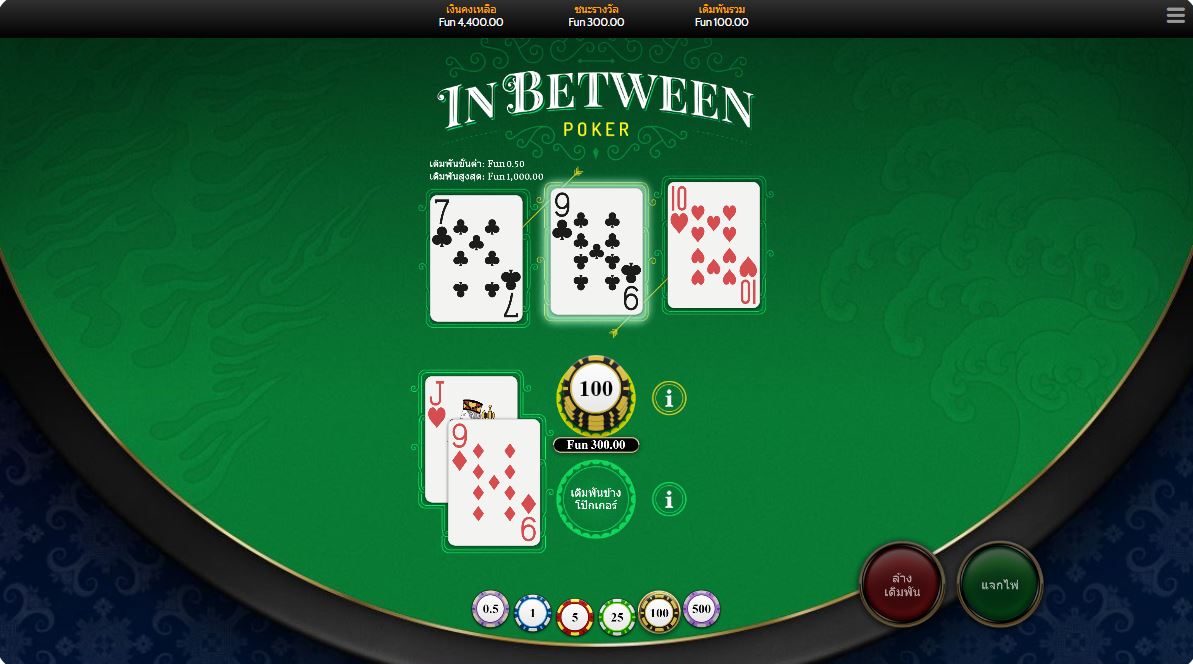 With OneTouch, you can try this famous poker variant with an RTP of 94.59%. Two cards are dealt to the players. Instead of creating hands, the game focuses on whether the next card dealt will be found between the two initial cards.

Wager your bitcoin chips on our premium poker tables!

Register today at Luckyslots and get a seat on one of our poker tables! Aside from video poker, you can also opt for a challenging live game of poker with our dealers. You can also try other games such as slots, baccarat, roulette and more.

Max out the fun and prizes when you play all-in at Luckyslots!

Luckyslots is one of Asia’s top online casinos, with over 1600 casino games, generous welcome offer, monthly promotions and giveaways, and generous loyalty program. It is safe and secure while providing exciting gaming experience.

The Luckyslots loyalty program, rewards customers with instant free spins, rebates and points multipliers. The more you wager, the more points you earn, unlocking bigger and better benefits. The rewards earned are instant, there’s no waiting!